Even in luddite mode I'm tech-friendly

About a month ago, through my own stupidity, I got bitten by some pretty nasty adware. Its ability to cripple my work has been off-and-on, how I imagine a computer version of an STD outbreak would be like. Back in high school & college, I would format/reinstall Windows roughly every 6 months. Basically, whenever it slowed down enough to be noticeable. I held this pattern from my time using Windows 95 and 98. In comparison from the age of high performance, my current install is about 2.5 years old.

My student job in college was telephone tech support. Those in our office would often bring in personal laptops for (ahem) homework. What I noticed is that those doing tech support will often tolerate problems in our own machines far beyond what we are called upon to fix. I was no exception, except this time I let it snowball a bit too much. I would have reinstalled XP but I seem to have misplaced my CD. Argh.

On an unrelated note, a Seagate 200GB hard drive I bought decided to die on me. It's still well within its nice 5 year warranty (even a 1 year would have covered it actually...), but I haven't gotten around to exchanging it. Mostly because I haven't totally given up on the recoverability of my pr0n files. On another unrelated note, the MP3 player I bought on clearance from CompUSA decided that its real calling was cosplaying an oversized bug. I'm not quite sure why it thought this, but that's what it showed me on its display after a few hours of use. Returning it was a royal one-hour pain. And on yet another unrelated note, a rebate offer from CompUSA was having difficulty processing. "Transaction not found," my eye! (I think it's resolved now.)

All of these mishaps happened within a 2 week span of time. I was not a happy camper. So I rebelled. And by rebel I mean, "ceased to buy PC hardware and software." You know, downgraded to normal. I am still in luddite mode actually. It has pushed me into restarting my bishoujo figure collection, which is now obvious to me as a more expensive hobby than being a sometimes-PC-enthusiast/gamer. Since I ought to include more images of actual bishoujo in here, I will include another widely-available-online picture of the last figure I bought before my hiatus from this type of fandom. Incidentally, I bought it during Kawaii Kon earlier this year. I believe Asuka needs no introduction. 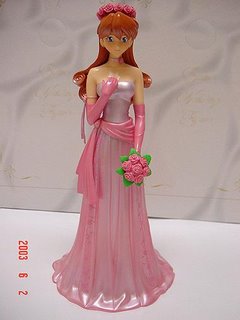 Actually, it was part of a (closeout display) set of four: Asuka pink and white versions, Rei blue and white versions. I like my women spunky and a bit nuts. Oh, and long-haired... oooh yes. So I favor Asuka out of the two. I'm beginning to want my digicam more and more with every post. It may be what breaks luddite mode. (As if starting a blog didn't.)

Posted by gaiaswill on 8/31/2006 01:37:00 PM
Email ThisBlogThis!Share to TwitterShare to FacebookShare to Pinterest
in bishoujo, figures, personal