(Well a long time ago when I was a wee teenage young'un, this was a website dedicated to uh... "the activities of consenting adults". Anyway, they're still around cuz I just Googled it. Nice to know. *ahem*)

Anyway, dakimakura are all the rage among otaku it seems. Or at least certain types of 'em. They depict the standard bishoujo variety, the busty, the loli, the meido. (NSFW) Weird perverse types like these sorts of things.

So I can't leave that stone unturned. Of course, I've joined their ranks.

Ryomou-chan, say hello to the nice people. (She's my first!) 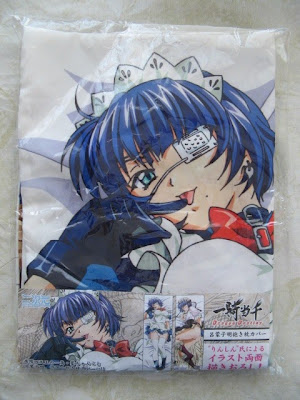 I once heard that once a character flaw has become sufficiently bad, it eventually becomes twisted into becoming a point of pride. I think I've reached that point. =D

I most likey the side on the right: 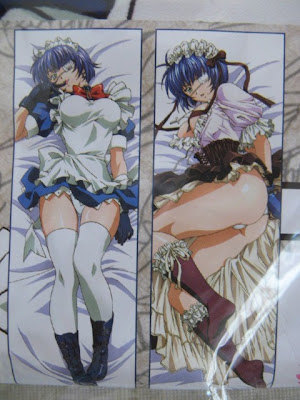 I got a cheap body pillow from Sears for $10 some months ago in anticipation for this moment. Unfortunately, I stashed it out of the way since I didn't expect to use it for those some months and I'm too lazy to fish it out. Not to mention that I haven't thought of an appropriate place to store her. My collector side won't tolerate the *ahem* risks inherent with "storing" her on the bed...

Posted by gaiaswill on 8/14/2007 03:50:00 PM
Email ThisBlogThis!Share to TwitterShare to FacebookShare to Pinterest
in bishoujo, true otaku