How disgraceful of me. I talk all about my upcoming computer in my last post but barely mention my current one. Her name is Lysandra. (Why yes, computers are female. Interpret that as you will but for me it is very much positive.) I love her very much. Boring stuff: Intel Mobile P4 1.8GHz, 512MB RAM, Radeon Mobility 7500 16MB, 40GB HD

Lysandra is very reliable and hardworking, requiring no hardware repair, the first computer I have owned with this distinction. We played lots together. Mostly Guild Wars toward the end. Unfortunately for some time, games became too difficult for her, being bloated pieces of software that can barely run on "minimum" requirements. And she's been sick for... oh, a year. I've been too lazy to back up everything to make her feel better with a fresh reinstall. (OhandIlostmyWindowsXPCD.)

Despite my naming her, I never really had any sort of mental image of Lysandra. Until a few months ago. I had stopped using wallpaper since Lysandra got sick since I needed all the performance I could get, but I badly needed to display this pin-up girl. Hopefully, you'll see why. 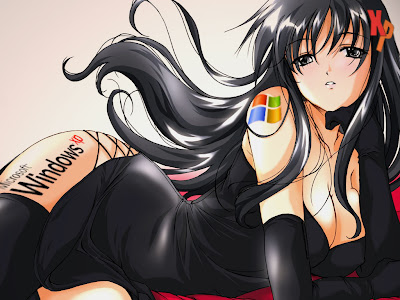 XP and XP-tan just have bad publicity IMO. As an OS, I liked XP Professional a hell of a lot more than 98 or 2000. Less crash and more game respectively. That XP-tan is so wonderfully easy on the eyes is just a lucky plus.

Posted by gaiaswill on 8/18/2007 08:22:00 PM
Email ThisBlogThis!Share to TwitterShare to FacebookShare to Pinterest
in bishoujo, computing